A Good Cup of Coffee 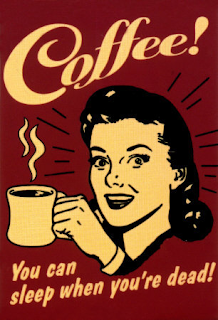 Why is it so difficult to buy a really good cup of coffee?

I was in Albany at the weekend and I bought a total of 3 cups of coffee at different places and only one was really drinkable.

I know my coffee choice is a little fussy - a long black topped up with soy, but I make a superb one at home with my little 15 year old Black & Decker percolator, so surely a cafe should get it right?

Unfortunately, that's just not the case. If the coffee is too strong, the acidic nature of the coffee is high and the soy milk will separate. Not only is this ugly, it's a nuisance as I have to keep stirring it to bring it back together. I've tried ordering a weak long black, but have found that it's just too weak and tastes rather like I imagine dishwater would taste.

Gloria Jeans was the first coffee I had and it was only just drinkable and that's because they allowed me to add my own soy milk. At $4.80, it was pretty expensive too.

The next was at Bay Merchants, for breakfast. Really too strong, but at least the proprietor noticed I wasn't drinking it and offered to bring some hot water to dilute it. Not sure of the price here, but I imagine it was pretty expensive too.

The last and worst was at Calamari's Cafe on the Beach. Not only did we wait ages to be served, I almost gave up waiting for the coffee it took so long. And when it finally arrived, it was served in a small glass with the coffee sitting at the bottom and the soy sitting on top. It was so excruciatingly strong that the soy milk would not even attempt to join the coffee, not matter how much one stirred!! I could only manage two sips out of that one.
The only plus here is that all their coffees are $4.00, no extra charge for the soy. But, since I couldn't drink it, that really became the most expensive coffee that I had all weekend.

Probably the only place in Albany I have enjoyed a good coffee is at Dome, but then the food is so boring at Dome that I don't generally bother going there.

So, today I'm sipping a delicious cup of coffee made at home just the way I like it!
Posted by The Bush Gourmand at 1:57 PM