As a grain farmer, it is in my best interests to promote grains as a part of a healthy diet. However, when people ask me about weight loss, the first thing I say it to try a gluten free diet for a while.

My reasoning is, that the Western Diet relies far too much on wheat. It is in everything from custard powder, cornflour, seasoning mixes, soup mixes etc. It isn't so much that wheat is a problem, it's the fact that it isn't prepared correctly for our bodies to assimilate the proteins it contains, known collectively as gluten. As the name suggests, gluten is the glue that holds everything together when wheat flour is used to make cakes, bread, biscuits and sauces.

Gluten is a generic name for the proteins found in a specific sub-group of grains - the Pooideae family of grasses. Wheat, oats, barley & rye belong to this grass family. Each grain contains a different type of protein, for example rye contains a protein called secalin and oats have a protein known as avenin.
Gluten from wheat is actually a composite of two proteins - gliadin and glutenin.

Wheat proteins can be particularly difficult for some people to digest. Around 1% of the population cannot have any gluten in their diets at all due to a condition called coeliac disease which is an immune reaction to proteins found in wheat, barley, oats, triticale and rye. The tiny finger-like villi in the large intestine (bowel) become inflamed and flattened, leading to malabsorption of nutrients and a host of symptoms including bloating.

When people are overweight or eating the wrong sorts of foods - eg highly processed (generally the two go together), the villi in the bowel can be compromised. They may be clogged, blocked and even laying down flat so that nutrients aren't getting to all the tissues and organs in the body that need them. Consequently, many systems begin to fail and various conditions raise their ugly heads - gallstones, arthritis, IBS, type 2 diabetes, ulcerative colitis, gout and a host of other conditions and diseases.

Are you still reading? Good on you! Here's a couple of pictures to break up all the verbosity. 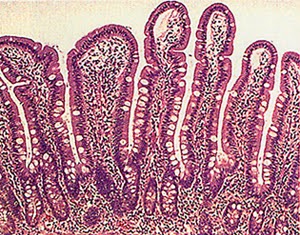 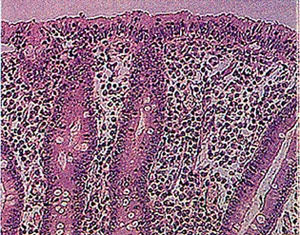 Therefore, removing gluten from the diet for a month or so can make a real difference to the body. The villi need to be in great condition in order to digest grains efficiently and gain the benefit of the vitamins (particularly the B vitamins), minerals, phytonutrients and fibre that they provide for ultimate health.

Once the body begins to recover and a whole foods diet is being followed, the villi will recover and begin to do the job they were designed to do. The body begins the recovery process and many people find that conditions they've lived with for years disappear. This is when whole grains can be added back into the diet.

By whole grains, of course I mean the complete grain - the bran which is the outer layer, the endosperm which is the inner layer and the germ, the heart of the grain. All these work together to assist with digestion of the grain. The germ of any grain will not survive nutritionally  for very long outside the grain. The endosperm will also lose a significant percentage of its nutrients when the outer bran is removed.
White flour is simply the endosperm of the grain that is left once the bran and germ are removed. Many healthy breads and bread mixes add back the bran and germ after milling. I find this amusing. ....Pull it all apart, allow some of it to break down and lose its nutritional value, then put it all back together and call it healthy.....

The best way to prepare whole grains for better assimilation and digestion is to soak, ferment or sprout them. Both nuts and grains contain phytic acid in their outside layer. Phytic acid can bind with key minerals needed from the nut or grain so they are less available to the body. Soaking, fermenting or sprouting grains in particular will also allow enzymes, lactobacilli and other helpful organisms to not only neutralise the phytic acid but also break down and release the complex starches and proteins within the grain to allow for easier digestion.

Sue Gregg of Sue Gregg cookbooks has developed some fantastic recipes using what she calls 'blender batters' using a two stage process. The grains are soaked in an acid medium ( usually whey but lemon juice is adequate) for 12 to 24 hours and then blended to a smooth batter. Eggs, flavouring and rising agents are added before baking.
There is no need to use whole unground grains, either. You can just as easily use whole grain flour and soak the batter. Just click for my Coffee Cake recipe and Blender Batter Waffles.  Both are also delicious, though both of these are wheat free.

I am now the proud co-owner of a fantastic Skippy Grain Mill and have been experimenting wheat from our farm. I've been grinding it to make wholegrain wheat flour and have developed a great recipe for almost wholegrain bread. The preparation needs to begin the night before you want your bread as the flour is soaked overnight.
Find the recipe here.  Soaked Whole Wheat Bread

Posted by The Bush Gourmand at 1:45 PM