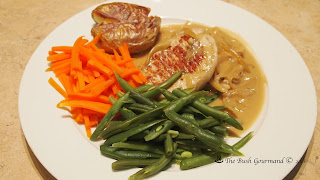 I bought some lovely pork steaks in Albany recently which were just too good to bash out to make schnitzels. So, I decided cook them as regular steaks and serve with a creamy apple & fennel sauce.
We all know that apple and pork have a wonderful affinity for each other, but not many people would think of fennel in this mix. I adore the aniseedy deliciousness of fennel seeds and normally will make a cabbage dish with fennel seeds and apple to serve with pork.
This time, a sauce was called for, so the apple and fennel seeds made a delicious debut. I didn't measure everything as I cooked, so amounts are estimates only. Use your own judgement and taste as you go!

Heat oil in a large heavy based fry pan. Season pork steaks and cook on both sides for a few minutes on high heat until browned. Remove to a plate and cover with foil.
Heat butter in pan and add onion.  Saute for a few minutes and add sliced apple and brown sugar, fennel seeds and balsamic. Saute until softened and caramelised.
Add chicken stock and cover with lid. Cook for 10 minutes or so until very soft. Test for seasoning.
Add cream mixed with cornflour and cook until thickened.
Return steaks and any juices to pan and reheat.
Serve with vegetables in season. I served with french beans, minted matchstick carrot and smashed potatoes.
Posted by The Bush Gourmand at 7:41 PM