Belly Fat, that annoying spare tyre, muffin top or whatever euphemism one would like to use, it's one of the most frustrating areas to try and fix.

An interesting article in the latest Australian Healthy Food Magazine gives an outline about how dangerous belly fat actually can be to our health. But what are the causes?
According the article, written by Stephanie Osfield, there are a number of reasons why fat can accumulate around the middle. 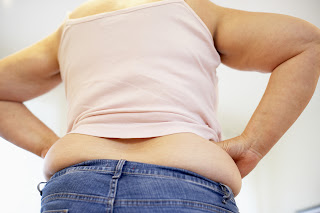 Hormones, simply overeating, alcohol, menopause, not enough sleep and stress. What's really interesting are the effects that this benign muffin top or beer belly can have on our bodies.

"Belly fat is often a sign of fat hiding in the abdomen," according to Tim Crowe, Associate Professor of Nutrition at Deakin University.
This is known as visceral fat and it can accumulate around organs such as the kidneys and heart. It's actually metabolically active, which means it pumps hormones and inflammatory chemicals  into the body. In women, this can lead to excess oestrogen which can lead to fertility issues, and I'm sure problems with menopause too.
Those chemicals and hormones are linked to conditions such as asthma, diabetes, arthritis and heart disease. How can that happen? It's just a bit of a spare tyre, isn't it?

For example, visceral fat continually releases excess fatty acids directly into the bloodstream. These then are processed by the liver and cause an increase in the production of other fats such as the 'bad' cholesterol, LDL. As if that isn't bad enough, the chemicals released by this visceral fat can prevent glucose from moving around the body and instead keeps it in the bloodstream causing levels to rise. So, the body tried to get rid of it by producing more insulin. This excess insulin in turn causes the insulin receptors to shut down and you get insulin resistance - bango wango - you're looking at Type 2 Diabetes.

Other health risks include dementia, osteoporosis, migraines and breast cancer.

BUT! There is good news! Nutrition and exercise...fancy that! Yes, as soon as you cut back those calories, the visceral fat is the first to go. As far as exercising, you don't need to do crunches, weights or sit ups by the dozen. In fact, a nice little tidbit I read in the magazine stated that:

"The marketers of the heavily advertised Ab Circle Pro exercise machine were fined $25 million in the US for deceptive advertising."

A little simple cardio will help. Anything that makes you breathless - climbing stairs, power walking, swimming, dancing and aerobics.

By following the the 80/20 idea (80% nutrition/20% exercise), visceral fat will reduce substantially along with that annoying spare tyre!
I know I've gone down a few notches in my belt.
Posted by The Bush Gourmand at 10:05 AM