Of the 'natural' sweeteners, the only totally natural ones are dates, maple syrup and honey. Stevia and Monkfruit are both natural products, however, all the monkfruit products that I've seen contain bulking agents in the form of either maltose or dextrose. Some stevia products will also contain these ingredients to make the product appear more like sugar.

In this post, I'll be looking at what are generally considered the more natural substitutes and will do a separate post on the sugar lookalikes and artificial sweeteners. 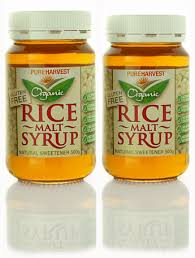 iquitsugar.com.au
Brown Rice Syrup
This is a highly processed product made by exposing cooked brown rice to enzymes that break down the starch to simple sugars. Then it's filtered to remove any impurities. What is left is a thick syrup which is basically glucose. It's made up of Maltotriose (52%) Maltose (45%) and Glucose (3%).
Both Maltotriose and Maltose are simply glucose, three molecules of glucose for Maltotriose and two for Maltose. So, by the time it reaches your intestine, it's 100% glucose and is rapidly taken up by the bloodstream, raising blood sugar levels. The production process means there are virtually no nutrients from the brown rice actually left in the syrup, so it has no nutritional value, despite what the Health Food industry says.

Agave "Nectar"
Somewhat a misleading name for this popular sweetener, as it isn't made from the agave leaf juice, but from the starchy root bulb of the agave plant. It is made the same way as High Fructose Corn Syrup, a highly chemical process involving the use of caustic acids, enzymes, clarifiers and filtration chemicals. The end product is about 70% fructose, higher than HF corn syrup, which comes in at 55%. As explained in my previous article on sugar, fructose is low GI, processes by the liver. Due to the fact that there is no fibre or anything of nutritious value in the agave, it's immediately stored as triglycerides. Remember, that the liver can only store so much triglyceride and the rest is converted into fat deposits through out the body. Fructose also inhibits leptin levels. Leptin is the hormone that tells your body you have had enough to eat. So, bottom line, stay away from this stuff.

Coconut Nectar
Basically, coconut nectar is the same as coconut sugar.  (See Sugar, Sweet Poison II) It's the syrup that hasn't been boiled down to make the crystals. Low GI, yes, but high fructose, so okay, but not fantastic in large quantities.

Honey
Honey is often used as a natural alternative to sugar in food preparation and cooking where a liquid can be used. It contains equal amounts of glucose and fructose. In various studies, honey did not raise blood sugar as much as regular sugar and it also lowered triglycerides, LDL, the 'bad' cholesterol and raised HDL, the 'good' cholesterol.
Honey is also an antioxidant and is often used as a topical antiseptic. The darker the honey, the more beneficial it is as an antioxidant. One of the best is Jarrah honey. Jarrah honey is unique to Western Australia and is seen as one of the best honeys for beating bacteria, so much so that trials are underway to use it to beat the hospital superbug, MRSA
Honey is still sugar, though a more nutritious version and can be used as a sweetener for occasional treats as part of a healthy diet.

Maple Syrup
A natural product made by boiling the sap of a certain type of maple tree, maple syrup contains a host of naturally occurring minerals including high levels of manganese as well as zinc ( 28% of RDA in 100grams), thiamine, potassium and calcium.  A study published in the Journal of Clinical Nutrition in 2007, showed that the polyphenols in maple syrup stimulated insulin release through pancreatic cells, indicating benefits for diabetes sufferers. Studies also found compounds in maple syrup that had anti-oxidant and anti-inflammatory properties.
Maple syrup contains less fructose than honey, so is a better option.
B Grade maple syrup is considered to be the best, funnily enough. It's taken from the tree later in the year and contains more nutrients. Again, like honey, the darker, the better.
As with Medjool dates, maple syrup is a great alternative to sugar in a liquid form, but cost may be a prohibitive factor in it's widespread use in the home kitchen.

Medjool Dates
These deliciously sweet and caramel flavoured fruits come from a date palm originating in Morocco, but grown in many desert regions now. They pack a fairly hefty calorific punch, - 3 dates is around 200 calories. But they also contain fibre, that helps to slow down the absorption of the sugars in the dates. Dates also contain a wide variety of minerals, including copper, magnesium, manganese and potassium. Vitamins include all the B vitamins and carotenes.
So, they would seem a good option to replace sugar in the diet. However, their use is limited due to the colour and texture of the dates. They're great blended with nuts and other ingredients to make protein balls or pie bases and can be added to cakes and biscuits for added sweetness, but I don't imagine anyone will be popping half a date into their cup of tea in the morning. They could be used in chutneys and relishes to reduce the sugar content and, of course, are a defining ingredient in Moroccan tagines. The price of Medjool dates is also a limiting factor in their use as a sugar substitute.

Honey, Medjool dates and maple syrup are my choices as sugar substitutes. When using honey or maple syrup in your recipes, reduce the amount of liquid to compensate. Cakes will be also be darker when using honey as a sweetener.
Dates can be substituted to an extent in cooking, but only in certain recipes. Experiment and google for ideas. I'll include some recipes on the blog soon.