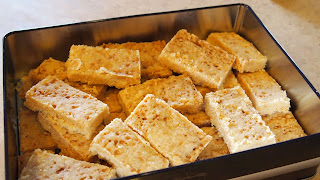 I adore shortbread, but have never been successful in making it myself. It's usually too crumbly or too soft and just doesn't taste right.
Since Christmas is nearly upon us, I thought I'd try again. I've been inspired by a cookery programme I saw recently where a Scottish woman showed Rick Stein how she made shortbread. She didn't give the recipe, but she showed her method. The unusual part was that she didn't mix the ingredients until she got a dough. She simply put the processed ingredients into a dish and pressed it all in.

I used the recipe from the Anchor Ground Rice packet as there was still some in the pack. I must have bought it a while ago because I can simply make my own ground rice in the Thermomix these days.

As I was busy this morning, I forgot about the shortbread cooking away and it went quite golden in colour. This resulted in a delicious brown butter flavour as the butter hadn't quite incorporated in parts. So, I've renamed this recipe, Brown Butter Shortbread. I thought afterwards that I should have removed some of the sugar and sprinkled it on top, so have added that tweak to the recipe.

Preheat oven to 170C. Grease and line a slice tin - place lining in so it comes up at the sides for ease of removal.
Blitz rice on speed 9 for a minute or so. If using regular or raw sugar, you can add it after 30 seconds to make castor sugar.
Place all ingredients into the Thermomix or food processor and blend on speed 6 until the mixture looks like breadcrumbs.
Press into slice tin and bake for about 7 minutes. Remove from oven and score into pieces. Sprinkle extra castor over the top and bake until golden.
Let cool in tin for 10 minutes or so. Lift out and cut into pieces along score lines.

Next time, I'll sub out about 30g of the flour for some almond meal.
Posted by The Bush Gourmand at 3:00 PM