Make Your Own Mince 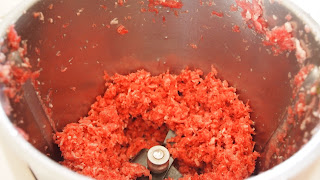 Today I wanted to make pasties so that Steve and his dad can take them for lunches during seeding rather than boring sandwiches.

Unfortunately, I had no mince in the freezer. But, I did have some chuck steak which I could easily turn into mince in the Thermomix!

To mince any meat, including chicken, lamb and pork, it's best to be semi frozen and cut into 2cm cubes. Do small amounts at one time - I prefer to do about 100g each time. Place cubes into the bowl and mince on speed 7 for around 8 - 10 seconds.
It does make a racket, so be prepared!

So, no need to buy mince again!

Posted by The Bush Gourmand at 4:39 PM