This week my sister came to visit to make Quince Paste in the Thermomix. She normally makes her Quince Paste on top of the tile fire and cooks it for seven hours, stirring regularly. The colour is a deep ruby red. Once she saw how I'd made it in the Thermomix in an hour and a half, she just had to try it!
The quinces were from her tree and since there were so many we made one lot while she was here and then I made a second lot after she'd left.

The only thing that I've found about Quince Paste made in the Thermomix is it doesn't have that gorgeous rich red colour. It's more of an orange, but does go a bit darker after it's stored for a while. The texture is probably better than that made on the stove and it's so much easier!

During the second lot of cooking, I was called out to help shift paddocks for an hour. The Quince Paste still had over eight minutes to go, but I turned it off and dutifully piloted the tractor.

I wasn't sure what I was going to face on my return, so imagine my surprise when I opened the lid to discover a deep ruby red paste! I gave it a further 10 minutes, but it probably didn't really need it. It had slow cooked in the Thermomix in that hour as the temperature was still at 80 after that time due to the large quantity of paste holding the heat in.

So, if you like your Thermomix Quince Paste to be a wonderful deep ruby colour, turn it off after 40 minutes or so and leave in the bowl for an hour.

Here's the comparison. The first batch is on the left. 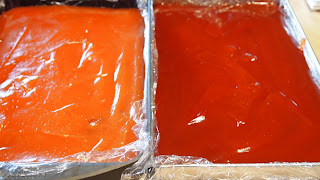 Posted by The Bush Gourmand at 3:43 PM