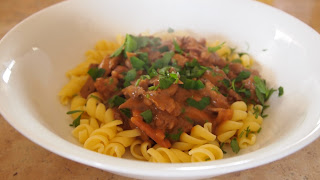 Today is a rare day when my husband is home. The weather is so lovely today inviting a late BBQ breakfast on the patio this morning.

At around 1pm, I was starting to feel hungry again and had a hankering for Stroganoff.

I've made the Beef Stroganoff from the Every Day Cookbook a couple of times, but have replaced the beef with chicken, and I really like it.
However, I thought I'd try another recipe developed by a fellow blogger, Chelsea, published on her Full Little Tummies Blog
This recipe came about as forum members reviewed the original EDC recipe and tweaked it to their tastes.
The changes I made was to cook it for 5 more minutes as I had used more mushrooms and my steak was still a little frozen. I added ground black pepper instead of cayenne pepper. I also cut my steak in the traditional stroganoff way, thinly sliced strips.

N.B. It appears that Chelsea has removed the recipe from her blog. Since I've made quite a few changes, I think I can add the recipe here. I like to acknowledge Chelsea's original idea as it's brilliant. My version is below.

I used 500g of Scotch Fillet. This may sound an extravagant use for good quality steak, but this small amount of meat makes enough to feed 6 people with pasta and vegetables. For tender steak, whether using rump, blade or scotch, cut semi frozen steak into strips 4cm x 2cm. Turn the strips on to their side and slice thinly. You get about three slices per strip. This means that the meat has been cut against the grain and it will be so tender it will melt in the mouth!

It's amazing how much the Thermomix can cope with. Here's the bowl after placing  in all ingredients: 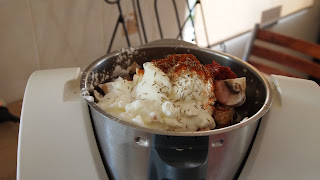 The finished Stroganoff went into the Thermoserver while the pasta was cooked in the rinsed out bowl. 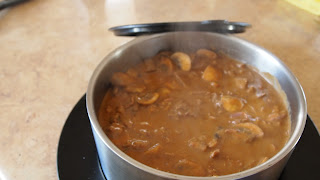 So incredibly easy and so delicious!

Drop garlic on to blades running at speed 7.
Add onion and chop at speed 5 for a couple of seconds. Scrape down and chop again if necessary.
Scrape down and add butter and bacon. Cook on 100/3 minutes/speed 1/Reverse.
Add remaining ingredients and cook on 100/25 minutes/soft speed/Reverse.
Place in Thermoserver whilst preparing pasta or cooking mashed potato in the Thermomix. I like to serve with a green vegetable or salad as well.

Posted by The Bush Gourmand at 3:03 PM