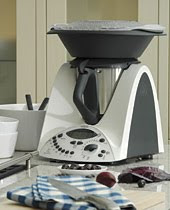 Thought I'd better write about this fantastic machine in case anyone is interested in learning more about it.

The Thermomix is a German designed multi-purpose kitchen machine. It can basically replace your blender, bread machine, mincer, food processor and stick blender. It can even replace your mixer in many cases.

It not only mixes, it whips, grinds, beats, minces, crushes, purees and it also cooks and steams. As if that's not enough, it will also weigh your ingredients as you add them!

I bought my TMX in September after seeing the new TM31 demonstration by Elsie McDowell. I was thoroughly convinced that this is what I had to have. I generally have to have every kitchen gadget that I see, so I was really hoping that it would live up to my expectations. It's expensive!

Well, I can say it certainly has and gone well beyond them. I use my TMX every single day, often three or four times. I make by bread in it, make cakes and biscuit doughs, pizza bases, sauces, jams and chutneys. I prepare a lot of the evening meal in the TMX, if not the whole meal. I've made fantastic vegetable stock paste that I keep in the fridge and use to flavour soups, casseroles and gravies. Ice cream and sorbet have been on the menu lately due to the heat here in WA. I also make my little dog's meals in it. She's ancient - we just worked out that today is the 16th anniversary of the day we got her for my son's 11th birthday!!

If you want to find out more about the Thermomix, go to this site: Thermomix in Australia.
This February/March, I'm planning to have a Varoma demonstration. This is the steaming part of the machine. If you would like to come along, please let me know!
Posted by The Bush Gourmand at 10:13 PM

Email ThisBlogThis!Share to TwitterShare to FacebookShare to Pinterest
Labels: Thermomix