Week One of my Money Saving Challenge and I overspent by $25. I'm not too disappointed because I entertained twice on the weekend, with one night being a Family Curry Night for 10 people.

This week I've spent a total of $74.79 on food so far. That included a Pantry Pack of plain flour and some casserole beef that was on special.
Not bad, though there're a few pantry items that need replacing such as mixed fruit, brown sugar and sultanas. Today was a big baking day - three lots of biscuits and two cakes. 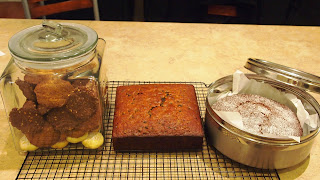 I've been making sure that I remember what's in the fridge and use everything up rather than finding something weeks later shoved to the back and growing fur.

There was some left over Mussaman Beef Curry from the Curry Night that was turned into Curried Beef Pies today for lunch.
A piece of pumpkin looked a little sad, so that was steamed in the Thermomix a couple of days ago and turned into Pumpkin & Ginger Cake and Pumpkin Fruit Cake today.  I substitute 100g of sherry for part of the water in the Fruit Cake Recipe.

The beef on special was semi frozen then minced to make a Potato Pie for tea tonight. Minestrone Soup for lunch tomorrow with Frozen Chicken Stock and Roast Lamb for tea tomorrow night. I'll be making ice cream over the weekend and some bread. I have some delicious fig syrup left after glacéing figs in summer, so that can be drizzled over ice cream for a quick dessert.

My sister has given me some citrus fruit so I'll be making some marmalade next week which means I'll have to add sugar to my shopping list...

Yours in frugalness,
Megan

Posted by The Bush Gourmand at 9:42 PM