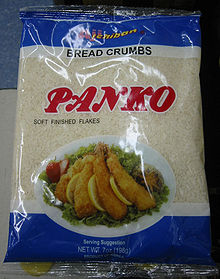 Panko Breadcrumbs are a Japanese product that's become popular, due in large to TV Shows like Masterchef. I refuse to buy it as it contains palm oil which I try to avoid in my food. It's also overpriced and so easy to make at home.

My mum used to make  dried breadcrumbs from left over white bread and no one thought it was anything special, so why is Panko so?

I found a really interesting video on YouTube from UpperCrust Bakery somewhere in the US. Panko simply means small pieces.
The history of Panko isn't thousands or even hundreds of years. It was developed during WWII when the Japanese were fighting the Russians. They wanted to bake bread without heat, so created a method that used electric current.

The bakery in the video makes it this way today, using only electric current which has little heat, but still cooks the bread. The dough is risen three times.  It comes out of the special ovens white and crustless, before being air dried for 18 hours and then made into breadcrumbs.

Fascinating! I bet the original Japanese version didn't have palm oil as they wouldn't have had access to it. I imagine they would have used something like rice bran oil.

The reasoning behind Panko's popularity is the fact that it's flaky rather than crumbly, so doesn't soak up as much oil as regular crumbs. It lacks any flavour, so is a good vehicle to carry other flavours.

I'm sticking with Mum's tried and true slow dried breadcrumbs from ordinary white bread. I don't eat white bread, but buy it for my husband. Why is that most men prefer white bread? To me, it's like glue.

Anyway, I have some crumbs in my oven right now.
Lightly blend (speed 4 or so and check after a couple of seconds) crustless bread in the Thermomix and spread the crumbs on a tray to dry out on very low heat - around 100C. If you leave the bread out on the bench for a few hours to dry out before blending, it will take less time. Normally, it takes about 3 or 4 hours. Store them in a large coffee jar in the cupboard.

The classic use for Panko is to crumb fish and chicken for either deep or shallow frying.  They're very versatile.  You can make a great crusty casserole topping by adding some grated parmesan or ordinary cheddar cheese and a little melted butter.  Cauliflower Cheese takes on a new dimension when topped with buttery, crispy breadcrumbs.
Posted by The Bush Gourmand at 9:50 AM